Now for something slightly more surreal. While the British and other Allied forces were doing their level best to keep women out of the armed forces (we salute you, Flora Sandes, for getting round this rule and looking pretty fabulous while doing it), the Russians had taken a slightly different approach. With their forces heavily damaged and morale low, the Russian army had already permitted women to join the regular units. This wasn’t quite enough for Maria Bochkareva, however, who wanted to take matters a little further.

Maria was born to a peasant family in 1889, and had a difficult childhood as a result of abuse from her father. Fleeing home at 15, she married Afanasy Bochkarev, moved to Siberia and began to work as a labourer. Strong willed and determined, Maria quickly became a supervisor. Unfortunately, Bochkarev was abusive to her, and Maria left him to take a variety of jobs on steamships and in brothels. She soon met her second husband, Yakov Buk, and put her management skills to work opening a butcher’s shop.

Maria might have been an excellent man-manager but she was sadly not so skilled in choosing husbands. Buk was also abusive, and was arrested for stealing twice. The outbreak of World War One gave Maria a new chance to escape and make her own way, and this she did in style. 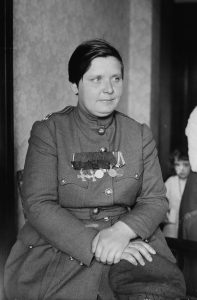 Maria has no time for your sexual harassment. She’s got men to rescue and trenches to capture. And lots and lots of medals to win.

Turned away by the army on her first few attempts, she contacted Tsar Nicholas II for personal permission to join the army. He granted it (perhaps he heard how good she was at running butcher’s shops) and she joined the 5th Corps, 28th Regiment of the Second Army. This was where Maria really shone – she won numerous awards and saved over 50 injured men during a single battle in No Man’s Land, while facing down ridicule and sexual harassment from the men in her unit.

The entire army was thrown into turmoil by the Russian Revolution of 1917 and the abdication of the Tsar. Maria, however, had other ideas. She campaigned for, and was granted, an all-female regiment of women to command. It was extraordinarily popular – around 2000 women volunteered, but only 300 survived Maria’s strict training. Once ready, the “1st Russian Women’s Battalion of Death” (the Russians took the naming process very seriously) were sent to the frontline.

Their performance was extraordinary – in one mission alone, they took three trenches and 200 prisoners. They were deprived of a future as a regiment, however, by the hostility of male units in the army. Despite her extraordinary record, Maria was captured and nearly killed by Bolshevik forces due to her connections to White Army captains. She managed to escape to America, where things take a rather bizarre turn.

Maria was feted as a war hero and secured meetings with Woodrow Wilson and King George V. She even begged Wilson to intervene in Russia, reportedly moving him to tears. Somehow, she also found time to write her memoirs – still in print today – and met Emmeline Pankhurst. Pankhurst described Maria as “the woman of the century”. 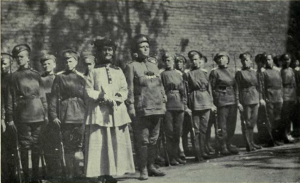 One of the bravest and most inspiring women in history meets Emmeline Pankhurst.

We’d like to finish the story there, but events took a rather sadder turn. Returning to Russia, Maria tried to organise another regiment to fight for the White Army, but was captured by the Bolsheviks. Against the orders of Lenin himself, she was executed by firing squad in May 1920.

She was posthumously pardoned and has remained a standard bearer for the military achievements of women. By World War Two, hundreds of thousands of women were enlisted into the army and were utterly vital to the Resistance movements. But we’ll leave you with Maria’s own words in one of her recruitment speeches:

“Come with us in the name of your fallen heroes. Come with us to dry the tears and heal the wounds of Russia. Protect her with yours lives. We women are turning into tigresses to protect our children from a shameful yoke – to protect the freedom of our country.”

For more information on Maria, feel free to follow any of these links:
Batalon (2015) – Russian film following the story of Maria and the battalion
Spartacus Educational
The Female Soldier