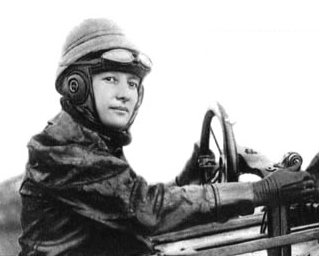 Move over, Han Solo. Shuffle up, Bear Grylls. Our next Audacious Woman was quite literally described as Danger’s Girlfriend. She also had much in common with our own Muriel Thompson, including a need for speed and a passion for ambulances.

In 1875, the suffrage movement in France was some 70 years away from achieving voting rights. Women couldn’t vote, study or even open their own bank account. Maria Marvingt was born into a world where being “audacious” was not exactly a prized quality for women. Neither was being an incredibly accomplished sportswoman, but thanks to some encouragement from her parents, Maria was reportedly capable of swimming 4000m at the age of 5. By 15, she had canoed 400km across Europe and by 24, she had obtained her driving license at a time when very few people even owned a car.

All of this was accomplished while running a household after her mother’s death, and there was plenty more to come. She competed in and won awards for all of the following sports: 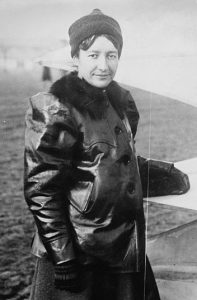 She even made the leather/fur combination look great.

Why master one, when you can win awards in all of them? She also climbed most of the mountains in the Alps and swam the length of the Seine. Oh, and when the Tour de France refused to let her enter (because of that being-a-woman-thing), she cycled the full length of the course anyway, beating two thirds of the field without any support.

Utterly dazzled and somewhat cowed by this, the French Academy of Sport awarded her the only ever “Gold Medal For All Sports”. This might have been to try and make her stop so that someone else could win something for the first time in a decade, but it’s still pretty cool.

This wasn’t quite enough for Maria, however. Perhaps bored with winning everything she ever entered, she took up flying and became a qualified pilot of hot air balloons and monoplanes. As well as setting various records and winning numerous awards (I won’t list them here as I am not paid by the word), she used her aviation expertise to come up with an idea which was to change the face of medicine in warzones: Air Ambulances.

This idea was a slow burner, mainly because planes were incredibly unreliable during the early 20th century. Due to financial issues, the plan had to be shelved during World War One, and Maria had to find other ways to occupy her time. This involved disguising herself as a man, sneaking into a French army unit and fighting at the front until she was discovered, being dismissed and transferring to the Italians (who were desperate for soldiers and less sexist), flying bombing raids and winning a Croix de Guerre for destroying German factories. It’s a good idea to stay active in your 40s, after all. 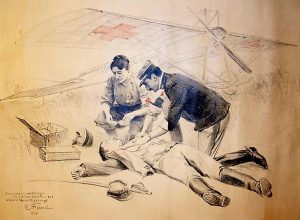 An illustration of Maria working with the air ambulances. She was frustrated with how slow battlefield medical procedures were, so naturally she came up with her own.

After the war, Maria worked as a journalist and lecturer, and redoubled her efforts to promote the idea of aeromedical evacuation (essentially, airborne medical support). She pushed engineers to create planes suitable for medical purposes, founded the Flying Ambulance Corps to train doctors, nurses and pilots for warzones and invented a new type of surgical implement in her downtime. By World War Two, the Allies were equipped with a fully functional Air Ambulance service, and Maria continued to serve as a surgical nurse through the war and in Morocco afterwards.

Retirement was apparently not on the cards, and in her 80s, Maria learned to fly helicopters, cycled 200 miles across France and broke the sound barrier in a jet plane. She died in 1963, aged 88. Happily, she lived long enough for women to get the right to vote, and to see her country freed from invasion. I would like to imagine she probably would have been the first woman in space, if she’d held on for a few more years.

One last thing – somewhere along the line, Maria had also published poetry and fiction under the pseudonym Myriel. Unsurprisingly, it won awards.

For more information:
Air Ambulance Service
A Tribute from Airbus
War History Online (who describe her as an overachiever…)

One last note for anyone who is still reading on – if you need a daily fix of amazing women, I can happily recommend Rejected Princesses for all of the stories of women who didn’t quite make it into the Disney Princess lineup. For *ahem* reasons.